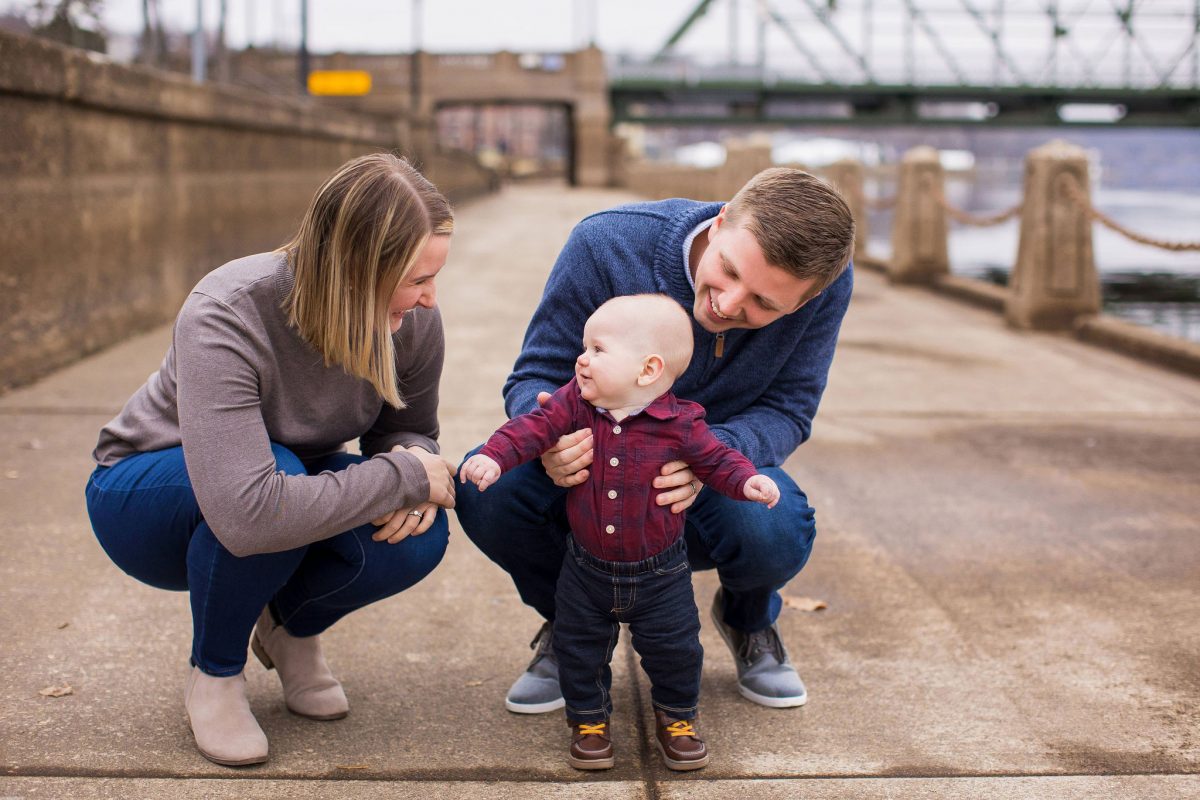 What a year. For many, 2020 will be viewed with negative thoughts and feelings. For many, 2020 was filled with fear, disappointment, and sadness. People missed out on seeing their friends, visiting family for the holidays, going to the movies, and even enjoying a lovely dinner out with their spouse. No one knows how much longer we must live in isolation, with a sense of dread hanging over our heads. We haven’t seen the sincere smile of a stranger since March, as we’ve spent the last 9 months hidden beneath masks or behind closed doors. For many, 2020 could not be over sooner.

For Matt and I, 2020 brought us our first child, a curious and independent baby boy. It goes without saying I’m sure, but I never planned to have a baby during a pandemic. I imagined strangers commenting on my growing bump, laughing with family and friends at baby showers, and welcoming my parents and in-laws to the hospital to proudly meet their first grandchild. We expected to bring our sweet boy to meet family in California or along to dinner with friends. We hoped for playdates with my dear friend’s baby boy who was born in March. I even dreamed of Matt and I walking the aisles at Target picking out Christmas presents together, commenting on how much fun the baby toys were and how excited we were to wrap them.

Instead, Matt and I spent the last two months of my pregnancy in seclusion, praying we did not catch COVID. We spent four days at the hospital during my induction and birth, and no one visited. When Luke was admitted to Masonic Children’s Hospital, Matt went with him the first night, while I stayed home alone, fearing that if I saw family or friends I could bring the infection to the hospital. After we brought him home, no one held him but Matt and I for the first month. We had no professional photos taken. Friends and family did not come over. We made no travel plans. Other than our parents, our family has not met Luke. We did not peruse the toy aisles to pick out presents.

All that said, Luke has been the greatest joy. While for most, 2020 will invoke feelings of grief and anxiety, it was the best year of my life. I could not imagine waiting a second longer to meet our sweet little boy. Not only was this the year Luke was born, but it was the year he learned to smile, the year he began giving us kisses, and the year he started reaching for us to hold him. It was the year Luke started babbling, the year he discovered how to army crawl, and the year he tasted ice cream. Every morning when Luke gives us a big gummy smile, I am filled with love. I hope that in the next months or years, Luke is able to share his smile and love with more people.

So tonight, when most of the world will be wishing 2020 “good riddance,” I will think of the year with love and delight. It wasn’t perfect, and it certainly brought its challenges for us and the rest of the world. But it also brought Matt and me the sweetest blessing we could have ever hoped for. I will forever be thankful for this year and all the wonderful memories.

Thank you, Sweet Boy, for making your dad and me parents this year.

“Growing like a weed”, an applicable phrase to Mr. Luke these past few months. As I write this, he is four months and 24 days old. Months three and four brought more breweries, the zoo, and lot’s of time at home! Check it out:

It hasn’t been without it’s bumps in the road though. If you don’t know, Luke has MCADD, a metabolic disorder that makes him unable to breakdown some types of fat for energy. More info in this blog post if you’re interested, but all you really need to know is Luke can’t fast for more than 4-6 hours because his body can’t effectively utilize his fat stores to keep his organs supplied with energy.

The Bump in the Road

I was at work in the afternoon last Thursday (October 1) when I got a string of texts from Kristin. Luke was throwing up in his car seat while she was in the drive-through.

Babies do spit up frequently and sometimes it’s hard to tell if he’s actually sick or just having a lot of spit up. I pulled up our spreadsheet tracking how much and when Luke has eaten. His morning wasn’t bad, but it also wasn’t great. He had two smaller feeding followed by one large feed. Kristin guessed he spit up most if not all of his last feed. Looking as his chart that would mean between 4AM and 1230PM he’d had only 140mL’s of milk (a little over four ounces). For some perspective, he usually eats 800mL-1000mL a day so only 140mL at 1230PM was worrisome.

Kristin and I agreed she’d drive home to try and feed him. If he could get a good feed in to replace what he vomited, we’d probably be okay. Sitting at my desk, I decided I should call our Nurse Practitioner on Luke’s metabolic team at the University of Minnesota Masonic Children’s. Luckily, she happened to be at her desk and answered right away. It’s a story for another time but our NP is excellent, we are extremely happy to have her on Luke’s care team.

I explained what was going on, how Luke had reduced oral intake and had been vomiting. A bad mix when you can’t breakdown fats for energy. While still on the phone discussing it, I poked my head into my manager’s office and told him something was going on with my kid and I’m headed home. After conferencing Kristin in to get more details, we made the decision to take him to the Children’s Emergency Department at U of M Masonic. By that time I was already on the freeway and about 15 minutes from home. I told Kristin to get him ready and we’d go together.

When I got home his appearance alone was striking, he was completely pale. Kristin said he wouldn’t eat, he’d had diarrhea, more vomiting, and turned pale all in the last 15 minutes. While this might sound somewhat innocuous for a normal kid, for Luke it can be deadly. Once his body runs out of food, without being able to generate ketones from breaking down fat, he’ll use glucose to fuel himself. Eventually he’ll deplete is glucose level to dangerously low levels. This can lead to seizures, coma, and eventually death.

Arriving at the ER we were both able to go in with Luke, unlike last time when only one of us was allowed in due to COVID. Admission was quick, the team at Masonic is familiar with MCADD even though it is fairly rare. After getting vitals they started him on Dextrose to supplement his body while he was unable to eat or keep anything down. After several hours we were admitted to the hospital on the same floor we’d been on back in May – 5th Floor Medical/Surgical.

I’ll spare you all the details of what being in the hospital with a kid is like as I think I covered the well in a previous blog post. We were there with Luke for three nights again. The first two days we were assigned to the Gastrointestinal team in addition to the Metabolic team. They tried to track down what may be causing his vomiting, in the end they settled on it being a viral illness. Once that was settled the goal became to support Luke with IV Dextrose until he stopped vomiting and returned to his normal amount of eating. This took us four days of staying in the hospital, Thursday through Sunday. It was tough but we made it through and were so happy to come home.

Our Metabolic team had prepared us that Luke would be prone to hospitalization while he was little if he got ill and lost his appetite, so I think we were mentally prepared for this to happen. Still, it jarred both Kristin and I to have to watch him be there instead of at home, and at only four months old. Hopefully, if there is a next time, we are even better prepared. Luke is back to his usual happy self and we are happy to be home.